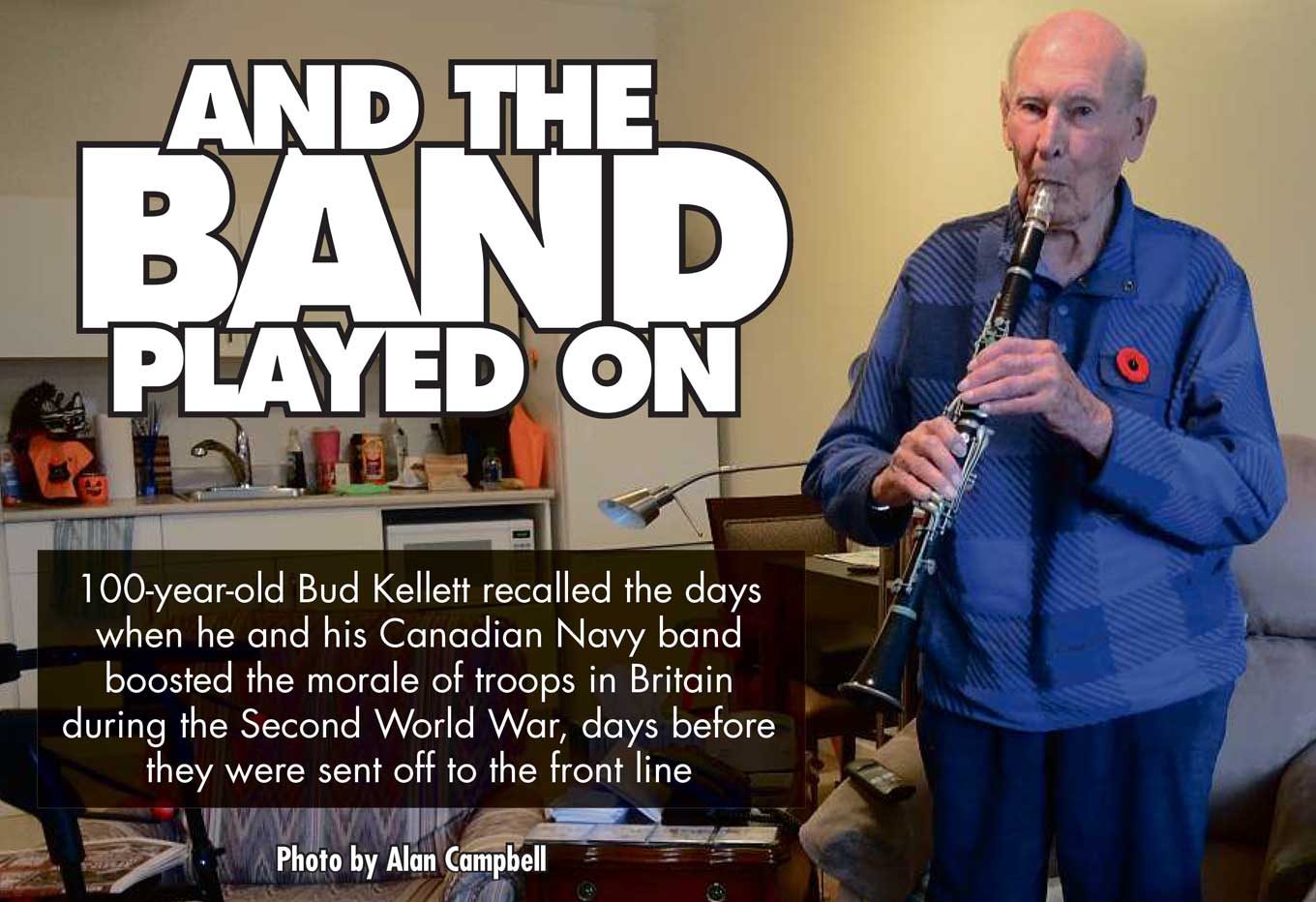 The Maple Residences’ very own Bud Kellet is featured in this article from the Richmond News by Alan Campbell. Re-purposed here with permission.

“100-year-old Bud Kellett recalled the days when he and his Canadian Navy band boosted the morale of troops in Britain during the Second World War, days before they were sent off to the front line”

Playing his heart out on his clarinet, Bud Kellett would steal a glance out to his naval band audience, knowing there was a good chance he may never see some of them again.

The Richmond resident knew he was doing his part for the Second World War effort in Britain around 1943, as a member of the in-demand, 60-strong Canadian Navy band. But as he gazed into the crowd at the packed English concert hall, it did little to blunt the harsh realization that the troops in front of him may be enjoying live music for the very last time.

“Many of the people we were playing for were heading to the front line of the war,” remembered 100-year-old Kellet, a resident at The Maple Residences in Steveston.

“I understood very acutely that some of them may never come back.

“It’s a very odd feeling to realize I’m having the pleasure of doing something for the country and for people who may never see the light of day again. On one hand, it was an honour, on the other, it was very sad. It was very surreal.”

Kellett, who will turn 101 in February, said he “gave it his absolute all” at those concerts, given the gravity of the situation facing many in the theatre.

“I would always talk to the guys and girls after each concert, we always made a point of that,” explained Kellett, who believes he was about 23 or 24 at the time.

Four years earlier, in 1939, Vancouver born and bred Kellett was a rising star in the classical music world in Canada and was preparing to head to the Royal Academy in London to get his “letters,” which would have made him the only person in the country with a degree in clarinet.

“I was due to spend six months in London. I didn’t go. It was 1939 and the war started,” Kellett recalled.

“I ended up joining the navy in 1941, I think age 21. Before I joined, I looked into it. If you were able to play in the band, you didn’t have to do basic training.

“But when I signed in, I got a bit of shock when the officer said I had to do it.’

Kellett said he was loaded onto a mine-sweeper from Victoria to Comox and spent two months in basic training, which “damn near killed me,” laughed Kellett.

“They sent me back to Victoria, where I joined the HMCS Naden Band and I spent two years there, playing all over B.C. for everyone involved in the war effort.

“We were pretty good and I think it did a lot for morale. It seemed to be very important to buck up people’s spirits.”

But there was one night Kellett said he’ll never forget, while playing Sunday night at the Royal Victoria Theatre.

“Our commanding officer would always come out and give a little speech at the end,” said Kellett.

“He said he had heard a rumour that ‘this band was leaving us for overseas.’ But he said we were so popular, we would be staying here to keep morale up in Canada.

“But a week later, we were on our way to Britain. We were not told where. We knew it was Britain, but that was it.”

Soon after receiving that news in 1943, and before getting posted overseas, Kellett married the “love of his life,” Margaret Wither, with the couple going on to have two children and two grandchildren.

Kellett said, given the secrecy of troop movements, they were not told where in Britain they were going.

And when his ship from Halifax sailed into Greenock on the west coast of Scotland, he and his shipmates were in for a bit of a surprise.

Does everyone here live in castles?

“We were loaded into trucks and taken to this castle, where our base was. It had a moat and a drawbridge,” laughed Kellett, who remembered wondering if everyone in Scotland lived in castles.

As it happens, the “castle” was the on-shore Canadian Naval base for HMCS Niobe, which used to be the Smithston Institute, which was, history books detail “the local poor house and insane asylum.”

“I thought, ‘where the hell am I?” said Kellett.

As well as playing in concert halls all over Britain for the next two years, Kellett and his band journeyed south to London one week in a month to make recordings, three storeys underground, due to the bombs dropping.

“The recordings were being played on the radio all over the country.”

A Bomb signalled the end

By the time Kellett and his band returned to Canada, the war was all but over in Europe and he was told to be ready to be posted to China.

“But the A bomb went off, so we were all told to stand down but be ready,” Kellett remembered, making reference to the U.S. dropping the atomic bomb on Hiroshima, Japan, in 1945.

“It felt great when the war was over and I was being discharged. No more bloodshed and all the other nonsense that comes with war.”

Although Kellett was more than talented enough to make a career out of music, he was lured into the Vancouver Fire Department, where he remained the rest of his working life and ended up a distinguished chief training officer until he retired.